The Hohokam and the Chaco regional systems stand out as two of the major prehistoric developments in the American Southwest. These two systems expanded over broad geographic areas of similar size (the Hohokam in Arizona and the Chacoans in New Mexico). These systems were of the similar time period but seemed to have developed and functioned independently, with little interaction. The Chaco and the Hohokam systems evolved in quite different environments, having considerably different irrigation infrastructure.

The Hohokam people inhabited the lower Salt and Gila River valleys in the Phoenix area in Arizona. These Hohokam Indian canal builders were given the name later by the Pima Indians. Even though the Indians of Arizona began limited farming nearly 3,000 years ago, the construction of the Hohokam irrigation systems probably did not begin until a few centuries C.E. It is unknown who originated the idea of irrigation in Arizona, whether it was local technology or introduced to them from cultures in Mexico.

Around 1450 C.E., the Hohokam culture declined, possibly because of a combination of factors: flooding in the 1080s, hydrologic degradation in the early 1100s, and the recruitment of labor by the surrounding population. A major flood in 1358 ultimately destroyed the canal networks, resulting in movement of the people. Canal use was either quite limited or entirely absent among the Pima Indians, who were the successors to the Hohokams Indians. The prehistoric people who lived outside the Hohokam culture area also constructed irrigation systems, but none was of near the grand scale as the Hohokam irrigation systems.

Remains of a Hohokam canal at the Park of the Canals in Mesa, Arizona

Around 900 C.E., the Anasazi of northwestern New Mexico developed a cultural phenomenon that now has more than 2,400 archaeological sites with nine towns each with hundreds of rooms along a 5.6-kilometer (9-mile) stretch. The Chacoan system is located in the San Juan basin in northwestern New Mexico. This basin has limited surface water, with most surface discharge from ephemeral washes and arroyos. The water collected from the side canyon that drained from the upper mesa top was diverted by either an earth or a masonry dam near the month of the side canyon into a canal. These canals averaged 4.5 meters (about 15 feet) wide and 1.4 meters (more than 4 feet) deep and were lined in some areas with stone slabs and bordered in other areas by masonry walls. These canals ended at a masonry head gate. Water was then diverted to the fields in small ditches or into overflow ponds and small reservoirs.

Chaco Canyon, situated in the San Juan Basin in northwestern New Mexico, had limited surface water, most of which was discharged from ephemeral washes and arroyos. The Chacoans developed a method of collecting and diverting runoff as previously discussed.  The diversion of water from the mesas into the canals combined with the clearing of vegetation resulted in the eroding (cutting) of deep arroyos to depths below the fields being irrigated.  By ca. 1000 AD the forests of pinon and juniper trees had been deforested completely to build roofs, and even today the area remains deforested.  Between ca. 1125 and 1180 AD, very little rain fell in the region. After 1180, rainfall briefly returned to normal. Another drought occurred from 1270 to 1274, followed by a period of normal rainfall. In 1275, yet another drought began which lasted 14 years.

The Ancestral Puebloan people made what is now known as Mesa Verde (Mesa Verde National Park) in southwestern Colorado their home for over 700 years, from 600 to 1300 AD. Today, Mesa Verde National Park preserves this ancient culture with over 4,000 known archeological sites including cliff dwellings and the mesa top sites of pit houses, pueblos, masonry towers, and farming structures. 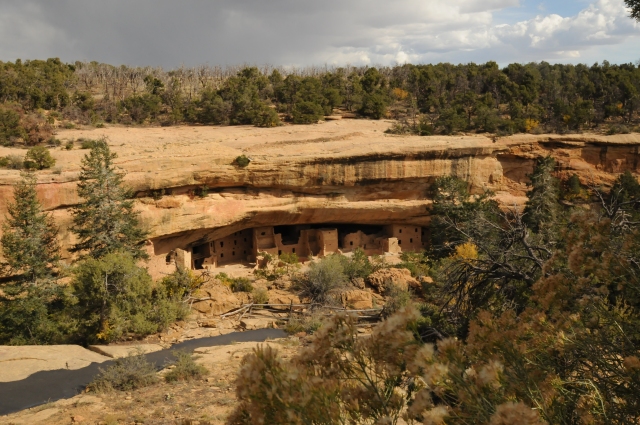 Four reservoirs have been identified in Mesa Verde National Park: Far View Reservoir (950 – 1180 AD); Morefield Reservoir (750 – 1100 AD); Sagebrush Reservoir (950 – 1100 AD); and Box Elder Reservoir (800 – 950 AD) (Wright, 2006).  Far View Reservoir (also known as Mummy Lake), located in Chapin Mesa, was built during two different periods and was used to store water for domestic uses. Reservoir dimensions are about 90 feet (27 m) in diameter and 12 feet (3.6 m) deep (with a depth of water storage of about 4.6 ft). This reservoir structure (shown below) contains masonry work, a diversion ditch (inlet structure), and channels.  The restored inlet structure is also shown in the figure below.

In the foreground is the restored intake structure (canal) into the reservoir. 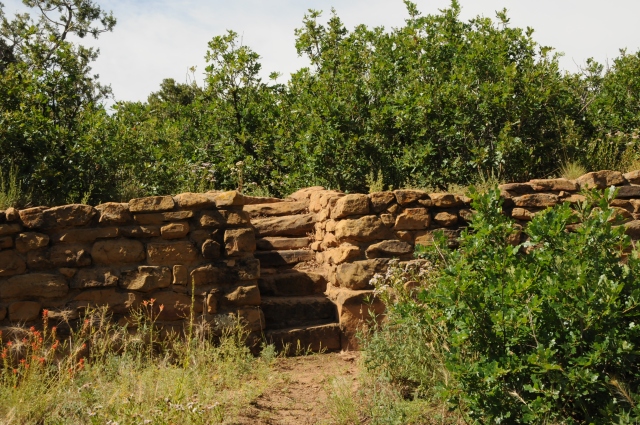 Restored stairway at Far View Reservoir in Mesa Verde National Park. Stairway not only funcitoned as a way to the stored water but also may have had special social or religious function.